Someone put a bomb in my mailbox. 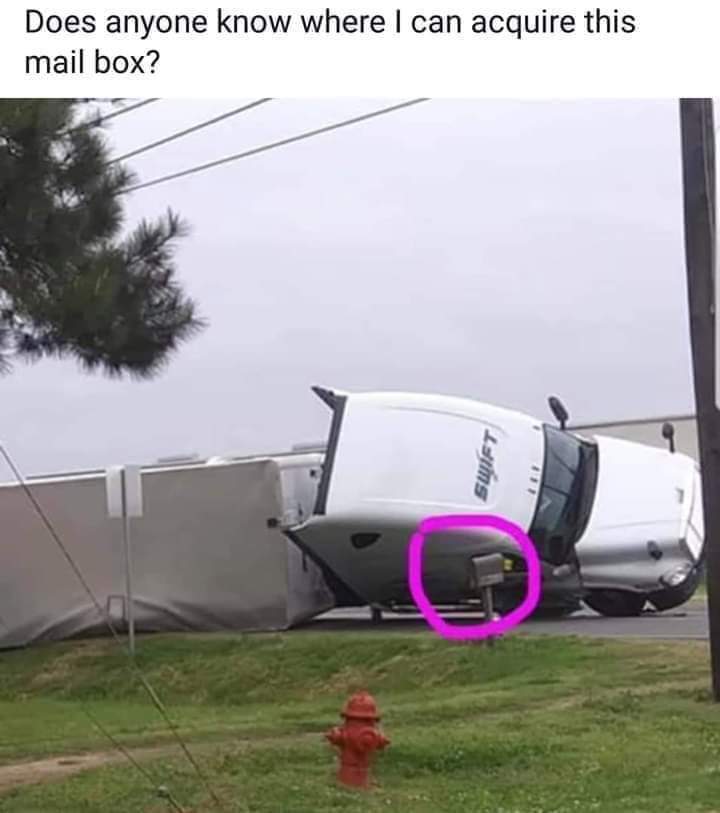 I told him it was because I still used Hotmail.

👍︎ 92
📰︎ r/dadjokes
💬︎
👤︎ u/Ttocs77
🚨︎ report
My dad's amazing driving advice to my sister: "I can replace any mailbox you hit. If you collide with a cop car, I've got a good attorney. If you run over a nun, God will forgive you. But if you hit my truck, you better leave the f***ing country."
👍︎ 35
📰︎ r/dadjokes
💬︎
👤︎ u/iwillhavethat
🚨︎ report
What do you call a man in a mailbox?

I thought I'd put it up again but then realised it'd be a repost.

👍︎ 12
📰︎ r/dadjokes
💬︎
👤︎ u/Vinterd
🚨︎ report
The maintenance man was spraying bug spray in the office mailbox this morning. He said he was trying to kill this spider.

I told him not to, that's where we get our webmail. He thought I was an idiot.

👍︎ 21
📰︎ r/dadjokes
💬︎
👤︎ u/Thedaveabides98
🚨︎ report
So my parents mailbox was obliterated when I visited them yesterday and these are the first words that were spoken as I walked in...

Me: Dad, who ran into the mailbox?!

Dad: No one that I know of. Someone drove into it though. 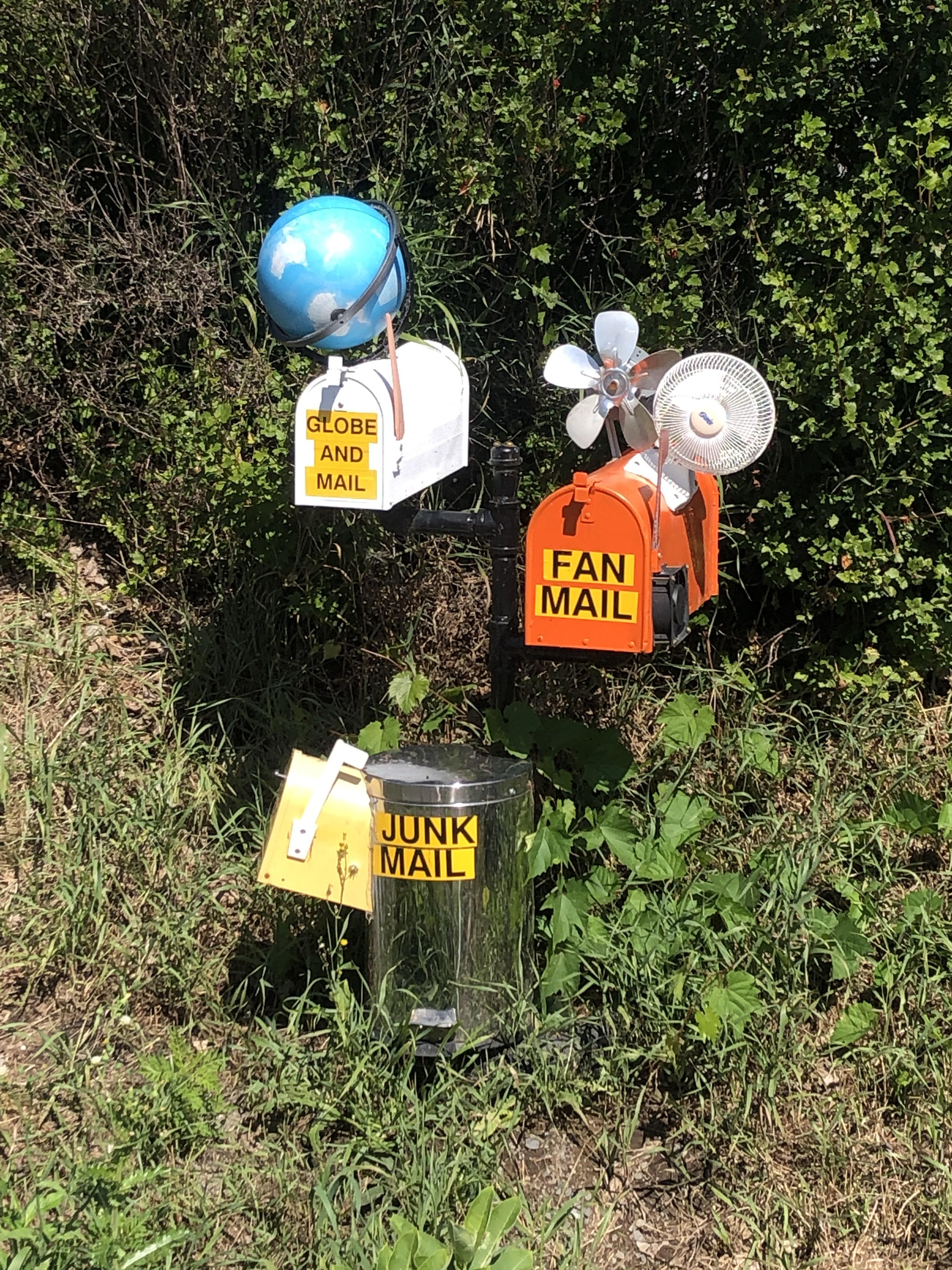 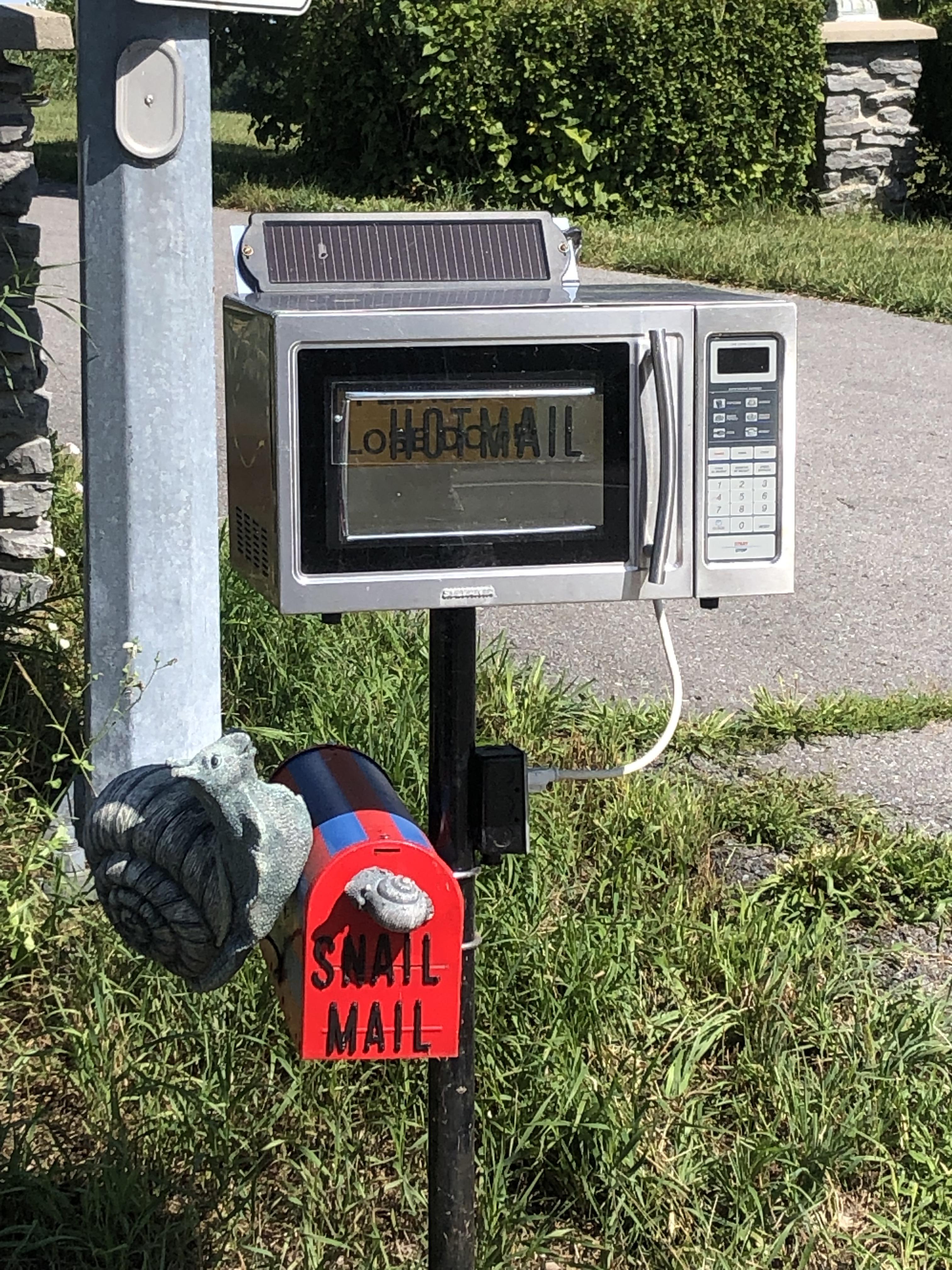 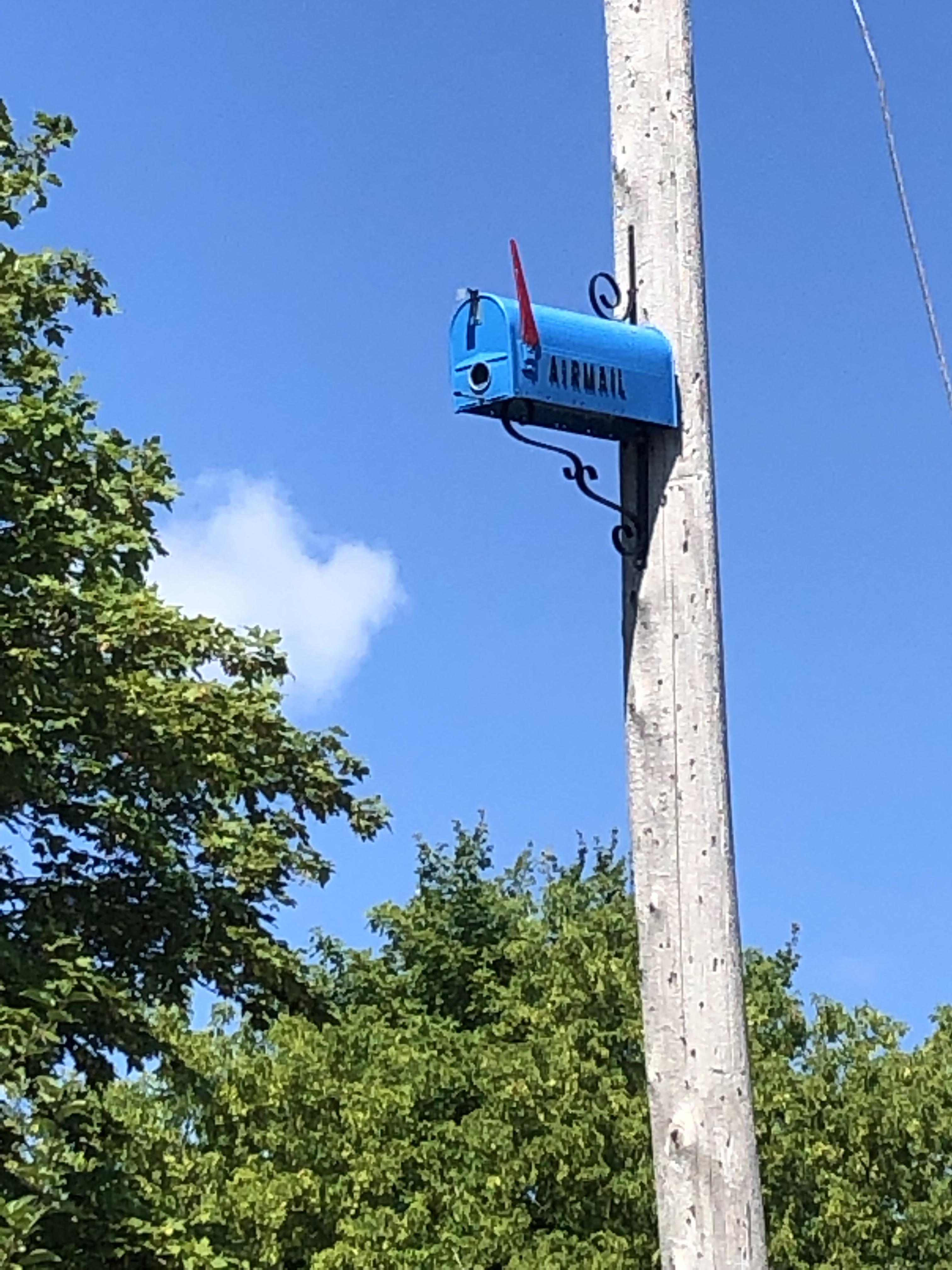 What do you call a man with no arms and no legs .....at your front door? Matt

...in your swimming pool? Bob

What do you call a woman with no arms and no legs who is popular with the boys? Hedy

What do you call a woman with no arms and 1 leg? Eileen

What do you call a Chinese woman with no arms and 1 leg? Irene

👍︎ 8
📰︎ r/dadjokes
💬︎
👤︎ u/WaterBoarder1969
🚨︎ report
Why are mailboxes on Grindr instead of Tinder?

Their preference is mail.

Because there are no femaleboxes

I know this might not be the place to post a question but I was wondering if any of you punny peeps can help me out? I got some free stamps and I want to mail a few potatoes out to my relatives. I know this is pretty stupid and a waste of time but I'm laughing at myself just thinking what their reactions and responses will be when they check their mailbox and see a potato. I want to write a potato pun somewhere on the potato. So of you're willing to help me do this; please leave me your potato puns for me to read and decide which ones I'll be using. Thank you for reading.

When I was about 5 years old, my dad told the greatest dad joke. He’d be driving the family through our neighborhood and would say “Look! A man wearing a dress!” My siblings and I would look around and laugh with my dad. We loved when he would say this (it was like an absurd scavenger hunt) but my mother absolutely hated it. “Where? What are you talking about Tom?!” She actually got angry since she couldn’t see the man wearing a dress either. Since he would do this on a semi-regular basis to make us laugh, it became a problem with my mom and she ended up getting so angry as to forbid him saying it ever again.

I never really understood what was going on since I was so young, but I really missed the man wearing a dress joke. At one point, I thought the joke referenced a nearby business with a kilted man for a mascot. A few years ago, I asked my dad what the joke was.

“Oh! It wasn’t the sign,” he told me. “We had a family in the neighborhood with the last name ‘Manwaring’. When we would drive by their house, I’d point at their mailbox and say ‘Look, a Manwaring address!’”

I was too young to read at the time so it took 20 years to be in on his brilliant pun.

A new postman on a route sees that in outgoing mail are several letters he delivered a day before. He thinks it's odd and redelivers them to the right mail boxes. Next day he sees the same letters again and he gets curious and sees that they all were addressed to same street. He redelivers them again to the right mailboxes. Same thing happens on the third day, so he thinks hard and formulates a hypothesis. He wants to confirm it, so he decides to stop his route delivery and wait there rest of the day.

Around 7 pm, he sees 4 men come to the mailbox, take their letters and put them back into the outgoing bin. The postman runs over to them and asks "hey, you guys use Reddit?" - they say "yeah, how did you know?", The postman says "all that reposting is pissing me off guys"

Q: What do you call a man with no arms or legs in a pond? A: Bob

Q: What do you call a man with no arms or legs under a car? A: Jack

Q: What do you call a man with no arms or legs in your mailbox? A: Bill

Q: What do you call a man with no arms or legs hanging on a wall? A: Art

Q: What do you call a man with no arms or legs sitting on a grill? A: Frank

Q: What do you call a man with no arms or legs in a pile of leaves? A: Rustle

Q: What do you call a man with no arms or legs in a pot hole? A: Phil

Q: What do you call a man with no arms or legs at the bottom of a hole? A: Doug

Q: What do you call a man with no arms or legs at the bottom of a not as deep hole? A: Douglas

Q: What do you call a man with no arms or legs at your front door? A: Matt

Q: What do you call a man with no arms or legs on the floor at a barbershop? A: Harry

Q: What do you call a man with no arms or legs that works at a brewery? A: Bud

Q: What do you call a man with no arms or legs water-skiing? A: Skip

"So, I put a paper in the mailboxes of a few teachers."

"Oh jeez. What did you do this time?"

"I typed a Word Document that said 'Please fill out this form' and left the rest of the page blank. dad cackle

You shoulda heard what they were saying: 'Why did they give ME one? Did YOU get one?' Everyone was losing their minds!"

We were at a kid's birthday party, and there was a play mailbox. She opened it, and pulled out a big foam letter "T". I said, "Hey look, someone sent you a letter!"

Neither she nor any of the other parents got it. (Or at least let on that they did.)

So I usually get the mail for my family, but one day I was fetching the mail, and a lizard came out of the mailbox. Since I am TERRIFIED of lizards, I naturally freaked and refused to fetch the mail ever again.

So last week my mom was getting the mail, and when she came back in, she said, "aghr, there WAS a lizard in the mail today!" and then she shows me a Geico advertisement.

He signed onto AOL and when it said "You've got mail!" (this was the first time I'd heard it), he said "It's a little late for the mail man, you mind getting it?" I went to check the mailbox and came back inside confused with no mail and found him stifling back laughter.

👍︎ 7
📰︎ r/dadjokes
💬︎
👤︎ u/domesofsilence
🚨︎ report
My dad has always been good at what he does.

I saw this picture on the front page and had I had to send it to my dad. This is his e-mail response.

Holiday greetings vary. Summer funny. Others try to spring a trap on the reader. Of course, that works best on people who will fall for anything. My Mom always told me that when I winter the mailbox to be careful for booby traps.

See son, I'm trying to look out for you. Hope you have a great Christmas!"

So while my dad was getting the mail he noticed the neighbor's Halloween decorations on their mailbox. The neighbors had strung these little plastic skeletons on top of it. Upon coming inside he said,

"The neighbors have these little human skeletons on their mailbox. Do you think we should put a mouse skeleton from the attic on ours?"

Mom: Did you bring in the mail?
Dad: Yes, but it's sitting outside. It's ant mail again.
Me: Ant mail?
Mom: There are sometimes ants in the mailbox.
Dad: They're living in the post holding up the mailbox.... You could say it's a post problem.