It will always work against you. 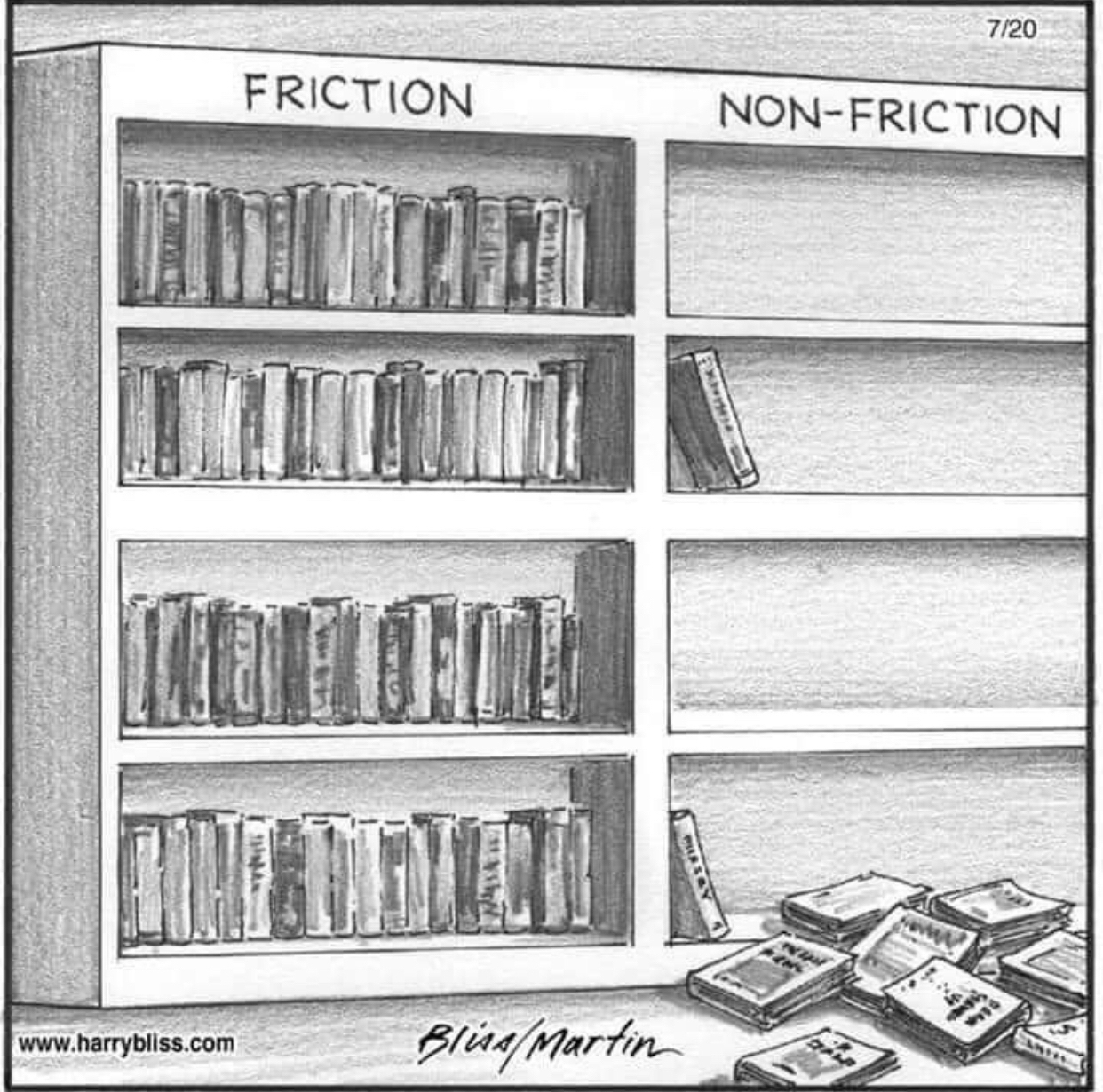 Now I know I'm getting some wear.

👍︎ 4
📰︎ r/dadjokes
💬︎
👤︎ u/DavideoandPhoto
🚨︎ report
All we need to make heat is create a little friction, I'll give you the fric- you give me the -tion

It was in the non-friction section.

👍︎ 29
📰︎ r/dadjokes
💬︎
👤︎ u/Predestinatural
🚨︎ report
I asked the librarian where the books on engine lubrication were located.

She said they were in the non-friction section.

👍︎ 31
📰︎ r/dadjokes
💬︎
👤︎ u/klwill1192
🚨︎ report
I found this small stick with one end coated with a material that can be ignited by frictional heat. It made me feel loved, wholesome and beautiful.

👍︎ 9
📰︎ r/dadjokes
💬︎
👤︎ u/Lum1nar
🚨︎ report
I am reading a book on the history of lubricants.

It was a brisk Saturday morning when Gerald arrived at “The Café,” a hip coffee shop right down the street. Wearing his large, burly black coat, he stared hesitantly at his watch. Thick glasses adorned his bright blue eyes, his gaze like starlight in a clear night sky. He was waiting, intently twiddling his thumbs. After a buzz of his phone, the message from Dad popped up: “Parking now, be there in 5.”

“Dad,” he whispered under his breath, swiping the message away to once again reveal the image on his lock-screen: a hazy picture of an ultrasound.

Gerald had not spoken to his father for three years. They had had a falling out, over which he did not remember. To him it was a competition of who could wait the longest without calling or sending a text. Who could wait the longest: him without a father, or his father without a son? The idea of friction in the relationship hurt like a thorn; piercing his soul more and more everyday. Until recently, out of the blue, “Dad” popped up on his phone. The rest is history. The rest leads to that Saturday morning, at The Café.

Bang! A car door rang out not too far from where Gerald stood. Gerald saw him. His father wore his tweed jacket like a coat of armor. His strut was now weaker than before they stopped talking; a weakness evident in his cane which supported every right step. His shortly trimmed white beard juxtaposed against his uncut, curly grey hair gave him the image of a wise wizard from a fairytale. He used to be that figure to Gerald, yet instead of a nice ancient being acting like a stone to keep him grounded, Gerald had felt as though his father was a rock pulling him deeper and deeper into a sea of monotony. Holding him back from his true potential. Maybe that was why he left? He still did not know.

“Hello, son,” came the withered voice Gerald had sook for so long, yet now that it had arrived wanted to avoid. “I can’t believe it’s been so long!”

“Yeah,” said Gerald, allowing a smile to grace his face. “Too long!”

Then they hugged, signifying a change in their relationship. Gerald had hoped something could happen to bring them closer together. He did not want to go on wondering what could have been. The regret and sadness weighed him down. Before starting a new family, Gerald wanted to be reacquainted with his own.

After finding their table and sitting down, the two began to discuss life. It was like old friends catching up after a long break. Although it took some time, Gerald began to warm u

It’s impossible to put down

👍︎ 29
📰︎ r/dadjokes
💬︎
👤︎ u/dakangzta
🚨︎ report
Why is it harder for Orange Juice to slide across a floor than apple juice?

Roses are red. Violets are red. The grass is red. The fence is red. OH SHIT THE GARDEN'S ON FIRE!

👍︎ 329
📰︎ r/dadjokes
💬︎
👤︎ u/Shoopdebop
🚨︎ report
What do you get when you rub two oranges together?

“We don’t serve your kind round here”

The string leaves the bar, twists himself up, parts his hair and walks back into the bar.

“Ain’t you the same guy who came in a minute ago?”

What do you call two oranges rubbing together. Pulp Friction.