2D skeletal animation for a fantasy indiegame with rabbits...

I am looking forward to creating animation for my 2D project. And I think that rigging will be a better option, than creating every single frame of animation.

But the question is where do I do this? In Godot? Or is there other software?

Help will be appreciated.

👍︎ 7
📰︎ r/godot
💬︎
👤︎ u/Simarphius_Renesans
🚨︎ report
My skeletal mesh has weird lighting artifacts when being lit by stationary or movable lights?? I have no idea what could be causing it. (Also the jumpscare animation is just a placeholder so dont mind that lmao) v.redd.it/r9ncrthdx9e81
👍︎ 2
📰︎ r/unrealengine
💬︎
👤︎ u/Dedlus_lol
🚨︎ report
Skeletal Animation in OpenGL using Assimp - Part 4

The tutorial is now available at https://youtu.be/SsVJP8Hh_gE

In this video we integrate the core Assimp matrices into the implementation of the skinned mesh class.

Or do I need to make classic frame by frame animations in other programs and just use animation sprite 3d node?

I'm planning on making a skeletal animation with multiple parts but I can't just select them all and go to the sprite editor, I've been searching online for solutions for hours and none of them is useful.

👍︎ 8
📰︎ r/unity
💬︎
👤︎ u/AvianCommunist
🚨︎ report
Why does my skeletal weapon mesh fly to the side during the 2hand equip and not the 1hand? I have ik disabled for both hands during the animation btw. v.redd.it/zjrpbd2e7h081
👍︎ 2
📰︎ r/unrealengine
💬︎
👤︎ u/Gameguy39
🚨︎ report
Skeletal mesh and animations workflow for godot

Hi there! Coming from Unreal, i have some problems with figuring out the workflow for animations, encountering a bunch of problems. First, what I want to achieve:

So, the problems I encountered so far:

Can you guys recommend a workflow for what I want without constantly fighting with the tools?

I remember seeing this singular scene from a show/ movie where a male character loses all his skin and muscles from his arm and is left with only a skeletal hand.

I've had this memory since my kindergarden days as I remember playing as the character as a kid.

I haven't seen anything else from the show as I just tuned in as my dad was watching it on an evening.

I see Spine Pro is the best program for skeletal animation, and very strong compared to other similar tools. But Spine doesn't support Godot (although Spine supports many other game engines like cocos2d, libgdx, Unreal, Unity, XNA).
I want to learn what are our options in Godot. Can't we export the animations from Spine in any way? Do we really have to use the built-in skeleton tool of Godot?
Will Godot 4.0 have new possibilities for the connection between Godot and Spine?
And what other skeletal animation programs we can use other than the built-in tool?

So I'm working on a little indie FPS game project and I have encountered the strangest issue I've ever seen in UE4.

When I play my 'healing' animation, my character puts his weapons away, jabs himself with a syringe, and gets his weapons back. All simple, and it plays fine in the preview window.

BUT when I play it in-game, my character puts his weapons away... and then the hands vanish until he gets the weapons back again?

So the animation IS playing because he's putting the weapons away, but for some reason the arms vanish from existence for a solid 120 frames.

I've tried everything I can think of. I've moved the camera/changed the FOV to see the hands vanishing with my own eyes, I've tried a move-to for the camera to make sure the arms aren't just flying off somewhere (they're not). I've tried completely re-exporting and importing the animation again, but same issue.

I'm linking a video of the problem. Has anyone seen something like this before? Does anyone have ANY idea what's going on? Hoping I'm just missing something obvious here.

I am interested in implementing my own skeletal animation system, like those found in programs like Unity, Unreal, Blender, etc.. I am aware of the general concepts of rigging and skinning, however, I am not familiar with the specifics, like the mathematics, data structures, algorithms, that kind of stuff. My research on this topic has been fruitless, so I was wondering if any of you guys have any good leads on books, articles, or videos that specifically go into detail about how to implement skeletal animation systems. Any ideas?

👍︎ 6
📰︎ r/gamedev
💬︎
👤︎ u/MathMagicianX
🚨︎ report
A very quick tutorial on how to retarget any Unreal Engine animation to your own skeletal mesh. This should help Jumpstart any new project and speed up the process of replacing your own mesh with the template mesh. youtube.com/watch?v=Pgsgs…
👍︎ 6
📰︎ r/unrealengine
💬︎
👤︎ u/justaguyjoshua
🚨︎ report
Skeletal animations using Spine for our upcoming hockey game, can you spot our special guest?

Hi guys and gals, i don't know if this is the right subreddit but i would like to know if there's some kind of tutorial for the creation of the assets for a 2d skeletal/puppet animation, in particular i would like to know what are the best practices for joints, for complex animations that require the change of some parts and hints in general.

There are lots of tutorial on how to animate with this or that program but finding one that explains how to make the assets is way harder.

Currently in the process of drawing an 100x60 pixel art skeleton character for a game I'm making. Being the main character it will need a ton of animations, so I'm wondering does skeletal animation work for pixel art, or do I have to draw each frame?

I have my base 2D model with a spine and everything, the problem is that if i add another sprite, lets say for a leg armor, the legs will keep moving but the armor won't and from what i could see i can't have the bones affect overlayed sprites.

Well, i do have a solution for this but I am looking for a better way.

The solution i have in mind would be to assemble everything in a single photoshop file with the clothing and then swap out the sprites. But that would introduce a lot of issues and complexity.

If i want to add a robe instead of an armor, i wouldn't want it to be affected the same way by the spline so i need to attach another sprite for that and make sure to remove the sprite of the armor before assigning the robe and vice versa if i want to wear a normal armor.

And if for instance on a later date i want to add another customization option, let's say an eyewear, i would have to make a new photoshop file with a layer for the eyewear and reanimate everything from scratch with this new "model".

Supposing there is a better approach for this, it would be a waste of time to go this way.

So I'm trying to find a solution for a 3D character to walk up stairs and slopes. I don't need anything super realistic. Right now I just want to be able to play an animation and readjust the height of the foot to whatever is below that foot. I've found several videos of people who have done it but they seem to just be showing off personal code or tutorials that will "come in the future".

The main problem: if I use a SkeletonIK object to point a foot position to a Position3D object it works, but I am unable to find a way to blend it with the existing animation.

What I need is a way for the animation to play normally, to obtain the foot position in that animation, use a RayCast object to find the surface below the foot, and THEN to reposition the foot using the SkeletonIK object.

Now the ideal way to do that would be to grab the global bone position before the IK adjustment is applied. I see in the Skeleton object docs... https://docs.huihoo.com/godotengine/godot-docs/godot/classes/class_skeleton.html

...that there are functions like "get_bone_global_pose" and I have been able to use some visible markers (for testing) to copy the bone transforms, but when I set the IK object to "start" the position returned doesn't move, as if the IK is applied first.

So I guess my question is, are all of the Skeleton functions overridden by the IK object before a script can be run on them or am I just using them in the wrong way?

Right now I'm considering toggling off and on the IK every frame to try and get the position first before rendering, but I don't think the engine order of operations allows for that.

👍︎ 5
📰︎ r/godot
💬︎
👤︎ u/Caravaggi0
🚨︎ report
Even though I have big and small characters I'd never realized just how drastically different character sizes could be. I just wish the skeletal animation for running was better on big characters. 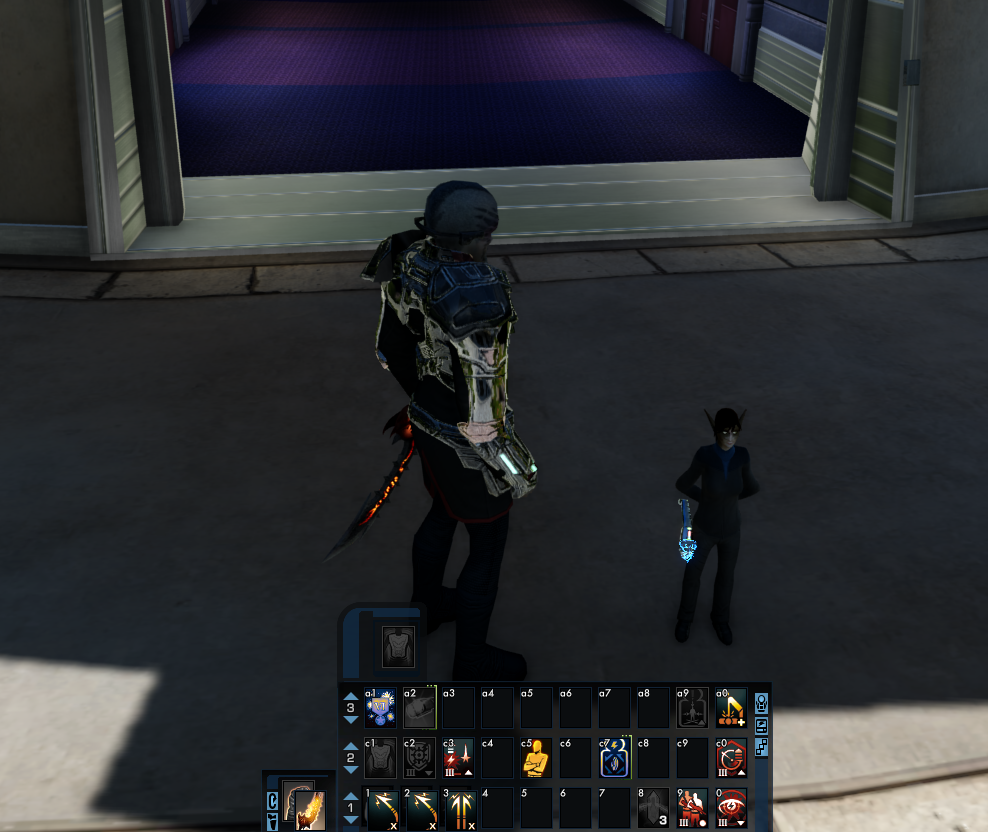 👍︎ 2
📰︎ r/unrealengine
💬︎
👤︎ u/payback_5
🚨︎ report
Is there a convenient tool like the skinning editor, which instead of using whole pre-made sprites, you could map textures onto polygons, and then use those polygons for skeletal animation? For example, if I wanted to transfer the fur patterns in this image onto the corresponding colored triangles:

I'm currently working on a VR project and currently look at ways to implement hands which are physically simulated so they interact with the environment. I would like to have my skeletal mesh hands have somewhat accurate collision with the environment while still being constrained by somewhat believable human strength.

Is there a way to have a skeletal mesh simulating physics made of multiple capsules completely follow an animation blueprint and otherwise act like one solid object towards other meshes?

I've got these different cases working which just always fulfill some of the criterias I'm looking for:

Secondary animation effects are essential for liveliness. We propose a simple, real-time solution for adding them on top of standard skinning, enabling artist-driven stylization of skeletal motion. Our method takes a standard skeleton animation as input, along with a skin mesh and rig weights. It then derives per-vertex deformations from the different linear and angular velocities along the skeletal hierarchy. We highlight two specific applications of this general framework, namely the cartoonlike “squashy” and “floppy” effects, achieved from specific combinations of velocity terms. As our results show, combining these effects enables to mimic, enhance and stylize physical-looking behaviours within a standard animation pipeline, for arbitrary skinned characters. Interactive on CPU, our method allows for GPU implementation, yielding real-time performances even on large meshes. Animator control is supported through a simple interface toolkit, enabling to refine the desired type and magnitude of deformation at relevant vertices by simply painting weights. The resulting rigged character automatically responds to new skeletal animation, without further input.

Looking for help with creating skeletal animations/character rigging for Unity for a turn-based RPG. Please see the doc https://docs.google.com/document/d/1nSCmk3ZXr89ln7SsB5UL-hejJIZLjluXMdsn5FWHeSg/edit?usp=sharing for more details and the following is a quick summary:

Also accepting offers to deliver only the sprites without skeletal animations. If the artwork is good, I am willing to find another person who is only interested in working on realizing the skeletal animations without having to design the characters and animation themselves.

The video tutorial is available at https://youtu.be/2tHVDssmUko

The video tutorial is available at https://youtu.be/pb6KZPaDBBY