When you know your trees ready to plant. 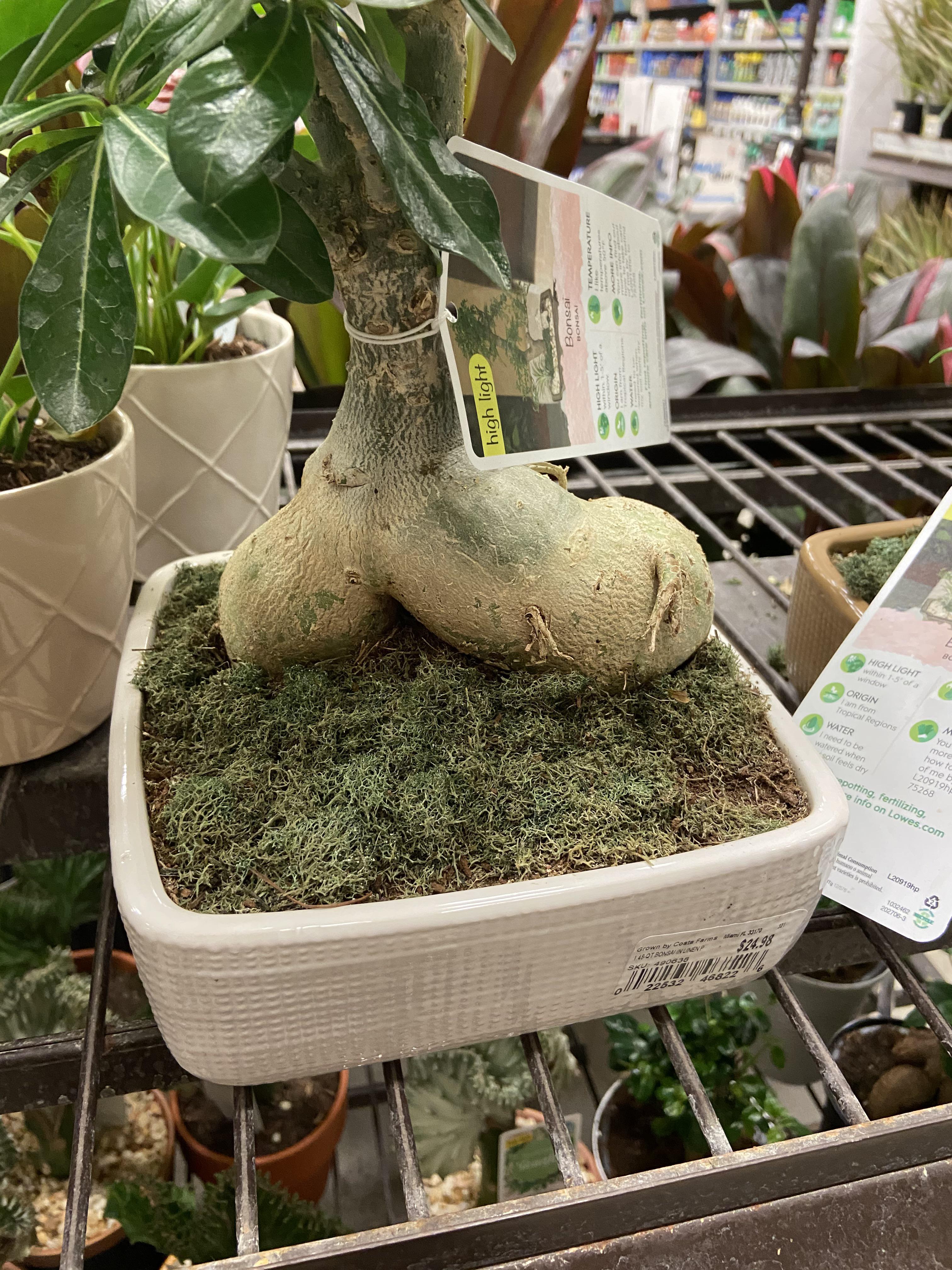 👍︎ 2
📰︎ r/dadjokes
💬︎
👤︎ u/TheOffbeatTurtle
🚨︎ report
What tree is bought the most at the plant store?

I’m not a huge fan of the bark

I hope you scrolled past that.

👍︎ 14
📰︎ r/puns
💬︎
👤︎ u/bigdickcorrine
🚨︎ report
What do you call it when you plant a tree at each corner of a house?

But I planted my butt on the couch.

It's such a shady business

Nvm, not from Alabama

👍︎ 9
📰︎ r/dadjokes
💬︎
👤︎ u/cracksniffer666
🚨︎ report
What did tree did the chemist plant in her garden?

👍︎ 4
📰︎ r/dadjokes
💬︎
👤︎ u/nbarudi
🚨︎ report
I planted some trees in my neighbor's yard to say Sorry for upsetting her.

I hope she accepts my apolotrees.

👍︎ 4
📰︎ r/dadjokes
💬︎
👤︎ u/nodnarb232001
🚨︎ report
The ultimate dadjoke. My toddlers believe that on 3 king’s day (along with bringing gifts) the camels severely screw up our home. I put muddy hoof prints throughout, upend the plants, knock over the tree, tear apart fruit, etc.

This year Was a symphony! We had aunts, and two grandmas join in for a seriously epic camel disaster for the kids to discover tomorrow. Feeling proud of my dad skills.

Edit: the oldest is 5. We celebrated a day early so their aunt could be here. The real 3 kings day is tomorrow. Don’t tell the wise men!

It’s amazing how fast my little treenagers have grown!

Now I have something to give me a hand around the house.

One might even say I was paid a pittance.

My parents were discussing what fruit tree to grow in the back yard.

Mum: I want a mandarin tree.

Dad: Do you want to know what tastes better than eating a mandarin? .. Eating Amanda out.

👍︎ 28
📰︎ r/dadjokes
💬︎
👤︎ u/NathanSurvey
🚨︎ report
I told my Ranger at work that after my dog had passed away, we buried him and then planted a tree to grow on top of his grave.

He responded with "I guess that tree will have more bark than usual".

Come home, see my dad planting trees in the backyard... I ask, "How do you know where to plant the trees?" Dad says, "It's arbortrary".

👍︎ 6
📰︎ r/dadjokes
💬︎
👤︎ u/cheechoo13
🚨︎ report
There was an old man who lived by a forest. As he grew older and older, he started losing his hair, until one day, on his deathbed, he was completely bald. That day, he called his children to a meeting...

He said, "Look at my hair. It used to be so magnificent, but it's completely gone now. My hair can't be saved. But look outside at the forest. It's such a lovely forest with so many trees, but sooner or later they'll all be cut down and this forest will look as bald as my hair."

"What I want you to do..." the man continued. "Is, every time a tree is cut down or dies, plant a new one in my memory. Tell your descendants to do the same. It shall be our family's duty to keep this forest strong."

And for centuries, the forest remained as lush and pretty as it once was, all because of one man and his re-seeding heirline.

Sir this is a private subdivision.

What's that in the bag?

Oh, these are bonsia plants.

Sorry, I can't let you through.

That would mean a banana tree is a nuclear plant.

How did the rose plant grow? It rose

His other good one after some thought..

How does a tree escape? It leaves

I‘m proud of his thinking

So this is a bit long, sorry about that.

Zorro and his best bud the Lone Ranger were riding through the desert one day, I forget where they were heading to or where they had come from, but we can safely assume shenanigans of some kind were the driving force.

They have been travelling for most of the day and are starting to get tired. There has been a discussion about making camp for the night, but as things are they have agreed to continue riding for a while longer, till the sun starts to set. Away and off to the west the Lone Ranger spies a plant that seems to have large pink flowers that hang in strips with white stripes running the length of them.

"Zorro, what's that over there?" he asks.

Zorro turns in his saddle and raises his hand to shield his eyes from the sun. "Ah, it looks like a bacon tree, quite common in these parts. Let's ride on, there is a good place an hour from now to set up camp."

The two friends ride on and as the sun is beginning to descend the have stopped and are making camp. As Zorro begins to make a fire he says to the Lone Ranger, "You know, I quite fancy some pork. You ride back to that bacon tree and get some for supper, and I'll finish setting up camp here."

"No problem Zorro, I won't be long" replies the Ranger, jumping back into the saddle and returning the way they came.

Time passes, and the sun begins to get low in the sky. 'Odd', thinks Zorro 'he should be back by now.' Another hour passes and the shadows are growing longer. 'I might have to go investigate, it's not like him to take his time.' More time passes, and, just as Zorro has decided that he must go search for his friend in the dwindling light, he hears the sound of Silver's hooves. Looking into the gathering gloom he sees his friend riding towards him. As the Lone Ranger nears Zorro can see the Lone Ranger is injured, there are cuts and bruises and he has an arrow through his hat.

"What on earth happened, Lone Ranger? Did you make it to the Bacon tree?"

"That weren't no Bacon tree, Zorro. That was an Hambush."

Once, there was a young woman who wanted to do a little psychological experiment. So she carefully bred cherry trees to bloom in multiple colors, and arranged to have them planted such that the trees of one color would spell out the name of some other color. You know, to test the Stroop effect.

However, the instructions (which were, admittedly, odd) weren't transmitted to the workers (all starving underpaid grad students) effectively, so the groups of various colored cherry trees were planted such that the colors matched the names, completely invalidating her experiment.

She now focuses on Anglo-Saxon royalty.

and the fact that there is a giant artificially planted tree in our back yard that is going to get too big to support itself eventually, or whatever, and we'd have to cut it down. I said we'd have to relocate the birds that have made a home in our tree first, naturally, or wait for them to leave. He said "how are you going to relocate the birds? You can't just send them an email and be like 'be out of here by next Thursday'." There was a pause, and moments later he says "oh you know what to do. " "You send them a tweet."

Oldest son (at a restaurant): do they accept dogs here? Me: no, it's cash or card

Waitress (bringing our after dinner drinks): I have three ports. Me: it was supposed to be two ports and a starboard

Youngest son (while we were driving): look, a cow... nevermind, it's gone Me: yes, we mooooved on...

Me: those plants around the redwoods are ferns Oldest son: they grow really close to the trees Me: yeah, they're really frondly...

We were sitting around the dinner table talking about buying some trees to plant in the lawn this fall.

We all give him a puzzled look and ask what on earth he means by that.

His reply: "I hear they're very shady."

Last saturday, I was at my parents' house to watch the game. While my dad and I are watching, my mom is on her laptop looking at trees to plant in the back yard, and constantly asking my dad what he thinks about every species of tree she comes across. Suddenly, my mom's phone receives several text messages, emails, and app notifications simultaneously. My dad looks at her and says, "Well, aren't you Poplar today? Leaf me alone and go check your phone." I laughed my ass off, as did he. She was not amused.

👍︎ 5
📰︎ r/dadjokes
💬︎
👤︎ u/Zaaryk
🚨︎ report
Like a demonic possession, this joke took a hold of me this morning and would not let go. I'm sorry.

The CIA had changed its recruiting practices, what with all the recent leaks and other problems. So Mr. Johnson was more than a little surprised to see a pine tree, which was dressed in a rather nice suit, waiting outside his office when he arrived at 9 am. He asked his secretary, "Gladys, who is this?"

"Mr. Johnson, this is Mr. Cone, our newest hire. He wanted to talk with you about the Honduras assignment."

Mr. Johnson spoke to Mr. Cone in his office. His new pine tree colleague was very knowledgeable and well-spoken, but there was something about him that threw Mr. Johnson off. He tried to dismiss his concerns as imaginary, but it gnawed at him all through the morning. He barely touched his lunch, as some of the things Mr. Cone had said were still swirling around and around in his mind. He was sure something was wrong, so he went in to see the head of their office branch, Mr. Smith.

"Johnson! Come right in, come right in," said Mr. Smith, puffing on a cigar. Mr. Johnson poured himself a tumbler of whiskey and sipped at it nervously.

"You're being rather quiet today, Johnson. Tell me, what's troubling you?"

"It's just this new guy, Mr. Cone," Mr. Johnson said carefully, staring at the bottom of his whiskey glass. "Are we sure we know him as well as we think we do?"

Mr. Smith took only a small puff from his cigar before letting his hand rest back on his desk. "Now really, Johnson," he sighed, "you're a good agent. Your caution has served you well in the past, but paranoia doesn't look so good on you. Mr. Cone has the most impressive resumé I've seen come across my desk in the last fifteen years. I've personally had him vetted by the best men in the business. He's going to be an asset to this office."

That was the response Mr. Johnson had been afraid of getting, but he continued to press his cause. "I understand that, sir. It's just that I'm getting the strangest feeling from this Cone fellow. Don't you think he's a little too perfect? A little too well-qualified?"

Mr. Smith stopped smoking his cigar altogether. A distant look came into his eyes as he mulled over the possibilities. "You don't suppose--"

Note: I'm a mom, not a dad, but I'm pretty sure I only thought of this because my father-in-law tortures me with these kinds of stories almost constantly.