The capital of India received a large shipment of refrigerators for displaying meat but they were contaminated with coronavirus...

it was a lot of new deli cases

👍︎ 2
📰︎ r/dadjokes
💬︎
👤︎ u/xtaldad
🚨︎ report
A man was sentenced to 20 years in prison when he inadvertently contaminated the food supply of 30 specimens of America’s national bird.

His actions were highly ill-eagle

Hope this is the right sub but this is something I need to share. Do not eat peanuts right now, if you do examine them carefully. There has been a fungus that has infected most of the peanut crops in north America. From the outside they look fine but if you bite into the nut you may notice a small black center. By then it's too late. The black center at early stages can cause digestive issues but if the entire nut is black it can cause failure of the nervous system and respiratory complications. There are pests that have laid their eggs in these plants and tiny microorganisms have developed in these plants. They leech into the fruit causing the black color. Ingestion can cause all sorts of troubles from diarrhea to death. These creatures are fatal. That's why you should always watch out for the creature from the black legume.

👍︎ 34
📰︎ r/dadjokes
💬︎
👤︎ u/prawncracker92
🚨︎ report
If you get an e-mail from the CDC about tins of pork being contaminated with COVID-19, don’t open it.

👍︎ 4
📰︎ r/dadjokes
💬︎
👤︎ u/hicycles
🚨︎ report
The Mars rovers have to be sterile before being sent to the planet to prevent cross contamination. Just one germ and they must clean the spaceship again...

The whole mission must be scrubbed.

Neither one is concerned about cross contamination.

👍︎ 3
📰︎ r/dadjokes
💬︎
👤︎ u/CognitiveNerd1701
🚨︎ report
Full of constant puns, tomfoolery and an extreme amount of cross-contamination; this video has it all. You may even learn to cook too! Wok With Yan youtube.com/watch?v=PTjwT…
👍︎ 2
📰︎ r/puns
💬︎
👤︎ u/SilkKringle
🚨︎ report
Did you hear about the ketchup contaminated by E-coli?

Authorities are still trying to get to the sauce of the outbreak. 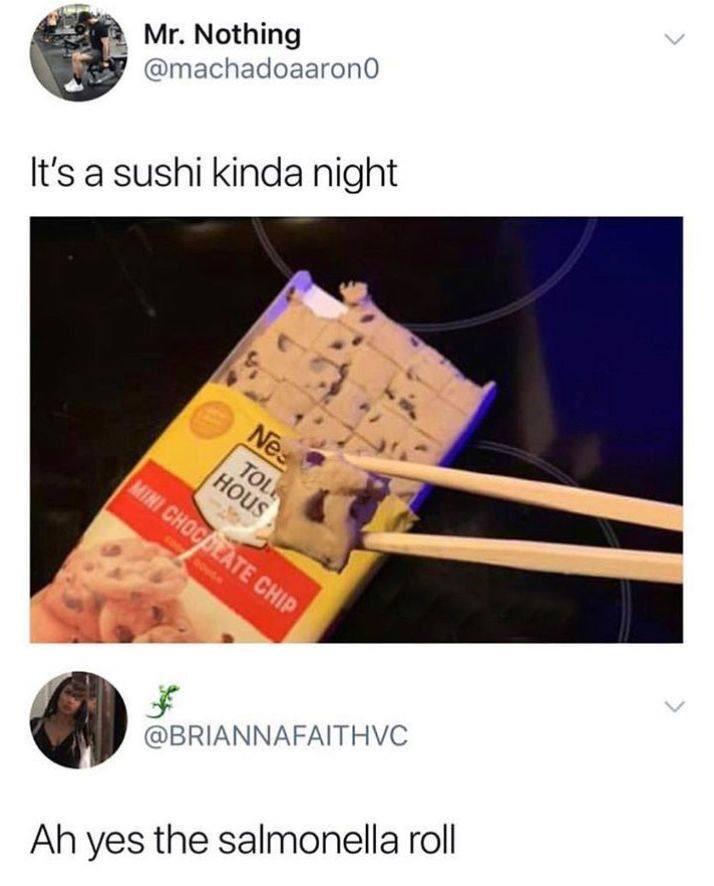 Note: The play on the word mass which can refer to a church service or a large number of people.

Because they were afraid of crotch-contamination.

It took an accident with red blood to bring blue to the world.

A pigment maker named Diesbach was trying to create a popular red out of cochineal, an insect still used for red dye in everything from lipstick to ketchup.

He added iron sulfate mixed with potash which we later discovered has a useful element now called potassium.

Anyway, the potash he used was contaminated with animal blood, which contains iron, and rather than creating red, he accidentally invented an affordable, long-lasting true blue.

When it came to making red pigment... he really BLUE it.

👍︎ 4
📰︎ r/puns
💬︎
👤︎ u/starzwillsucceed
🚨︎ report
Scientists have located the wood that they believe Christ was crucified on.

Carbon dating puts it at 2000+ years old. However, other items located nearby were much newer. Scientists believe it’s just cross contamination.

When they answered the door to give him candy, I had him say "MERRY CHRISTMAS!" or "HAPPY NEW YEAR!" and "I'm allergic to candy, do you have any sardines?"

He also stood facing away from the door for some.

He got a lot of laughs, a door slammed in his face and an offer for spicy mustard sardines.

Video: Halloween dad joke: http://youtu.be/Mp3IBlZnfFw (Forgive the vertical. I was trying to be discrete so not to contaminate the proceedings.)

...so as to avoid floss-contamination.

It has been found these locations are contaminated with dihydrogenmonoxide, one of the deadliest compounds in the world.

At risk is cross-contamination.

Recently, my mother started smelling a coolant leak from our refridgerator. She called the repair man and he started work. Several hours later, he had his diagnosis, and it wasn't good. The whole machine was going to need to be replaced. Just as he was finishing up, my dad walked in. My dad asked the repair man what the damages were, and he explained that the coolant intake had sprung a leak. The whole unit was sealed, and air was now getting in and contaminating the entire system. The repair costs of the fridge would be about the same as getting a new one. My dad just sighed and looked at his hands.

Dad: "It sucks." He looked at the repair man with a goofy grin on his face. The repair man thought for a moment before answering.

Repair man: "Yeah... it does suck." Then both men cracked up laughing.

Note: The play on the word mass which can refer to a church service or a large number of people.