Frazzled, the bartender cries, "What's with the long no's!?"

Cause there’s no such thing as an uncle-eater

This is because they're filled with anty bodies.

Told to my 2 month old daughter who thought this was hilarious! Or... maybe she just smiles reflexively... either way....!

Beasuse they are full of anti-bodies. 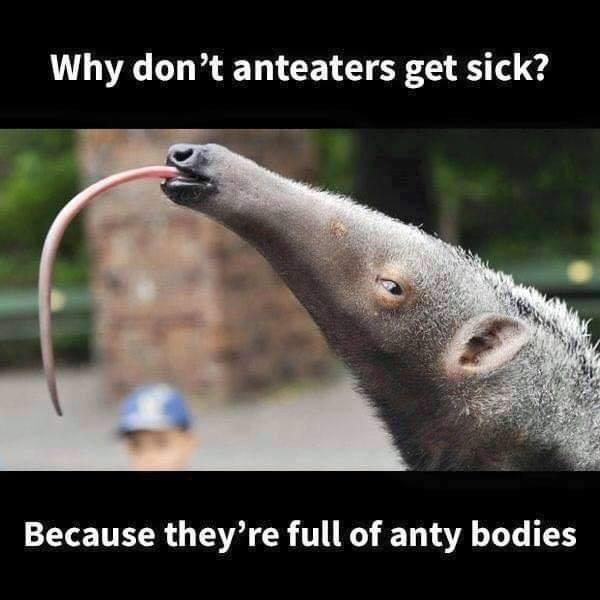 During dinner, I compared how Son #2 [4yo] was eating his spaghetti to an anteater. This sparked the following conversation.

Son #1 [7yo]: "Then you wouldn't really eat very much spaghetti. Ants eat just a little because they're so small."

Me: "Well, did you know it's pretty likely that, eventually, your sister will grow up to be an aunt?"

[Kids look confused. Son #1 has worked out the pun, is rolling eyes.]

Wife: "He's right. We helped do it to Auntie Leah."

but alliteration attacked the anteater.

My wife and I took our daughter, niece, and nephew to the zoo today. We were standing in front of the anteater exhibit when I protectively put my hand in front of my wife and whispered, "watch out, you don't want to get too close to these things..."

Me: "Oh you're fine. It's her (indicating my wife). These things are aunteaters."

"How about something to eat?"

"What about some peanuts?"

Frazzled, the bartender cries, "What's with the long no's!?"

The anteater replies, "I was born with it!"